Rohingya shared their stories during my visit to the Bangladeshi Refugee camp and witnessed hearing the horror, loss, and hope of recovery.

The persecution of the Rohingya — Myanmar's religious and ethnic minority community — dates back to 1948, which the country achieved independence from its British colonizers. Ever since repeated pleas for a promised autonomous state have been contemptuously rejected. On the contrary, inhuman barbarism heaped on the Rohingya — consistently classified as "illegal migrants" by successive Myanmar governments — has increased, with 2017 witnessing the high point of barbarism unleashed by the Myanmar military. Over 700,000 Rohingya then fled to neighboring Bangladesh.Interviewed Rohingya'sRohingya's from Myanmar who fled to Bangladesh, most of them said that "we fled from our country with fear to save our children and lives. We came here to find freedom. We feel we're safe here".

This part of the project was exhibited at Four Freedoms Park Conservancy & United Photo Industries for "Capture your Freedom" at New York, an outdoor exhibition.
This exhibition presented four large-scale photographic cubes corresponding to each of the four freedoms -- freedom of speech & expression, freedom of worship, freedom from want, and freedom from fear. The exhibition is the first of its kind held at the presidential memorial.

A panel of 6 esteemed photo editors and human rights advocates selected work by 30 photographers from around the world, which UPI produced in the form of four large-scale Photo Cubes on the picturesque Franklin D. Roosevelt Four Freedoms Park. 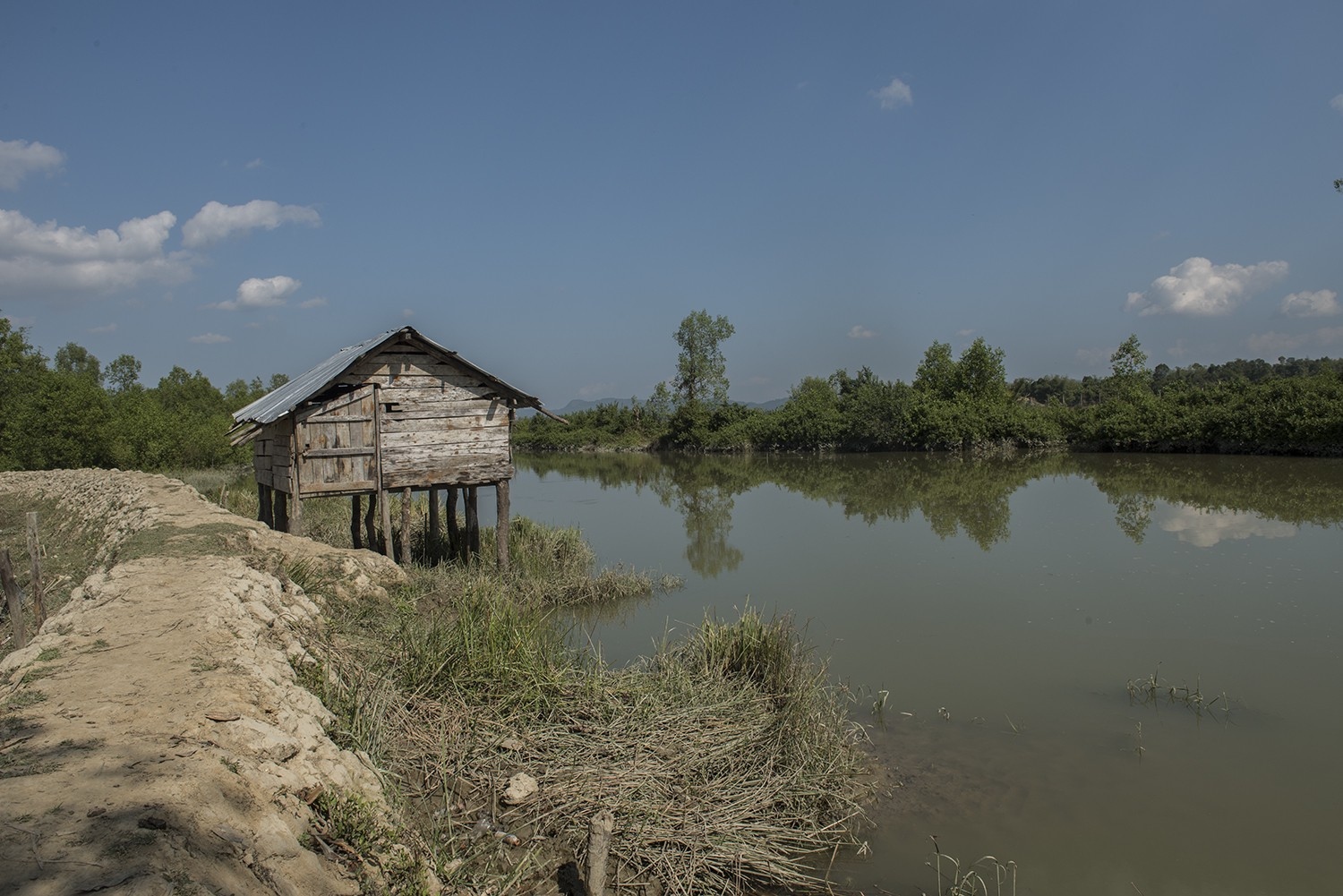 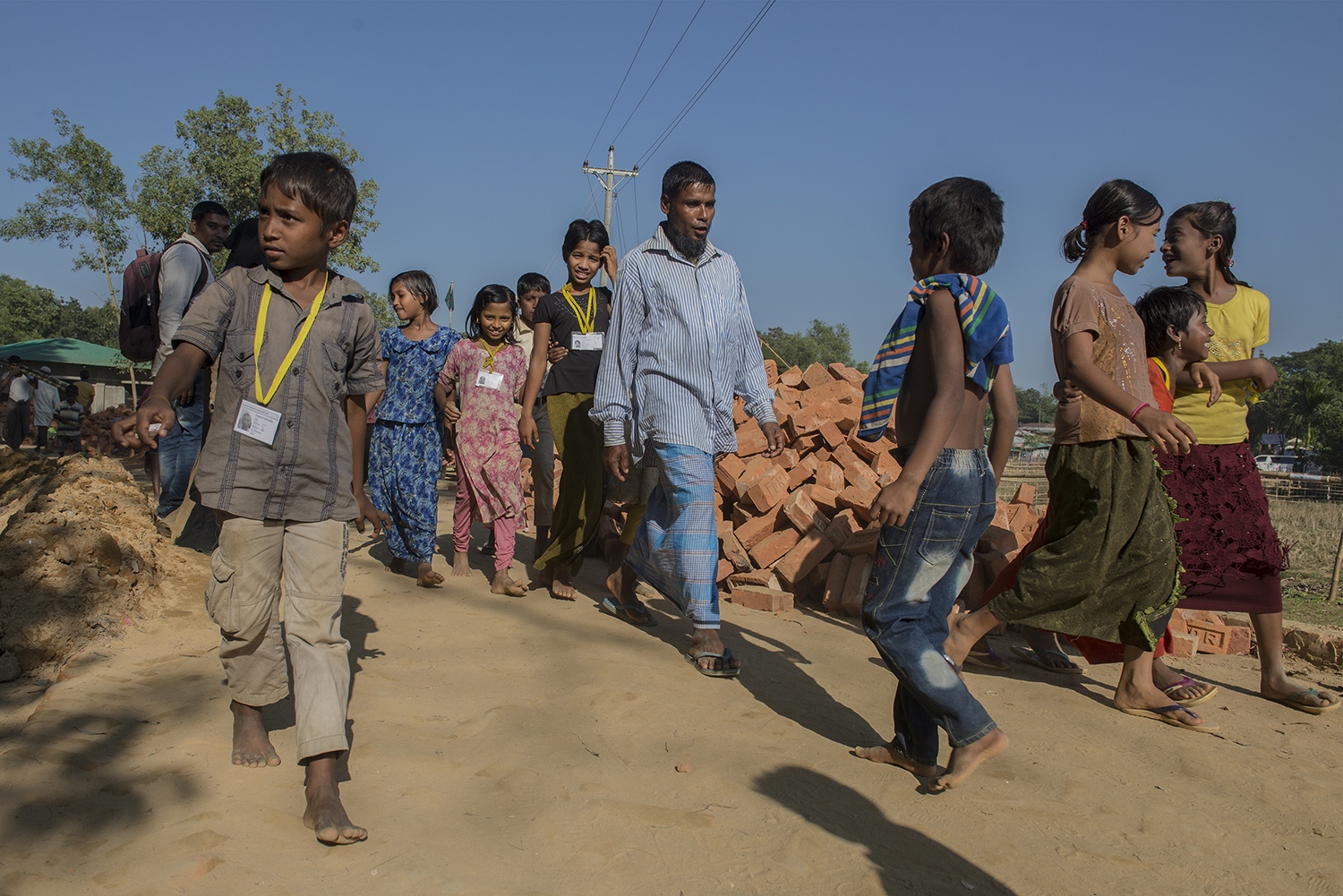 Having been provided sanctuary in Bangladesh where they experience safety and intellectual freedom, albeit weighed down by emotional distress that displacement brings, the Rohingya refugees pine for a return to normal lives in their homeland.

However, a deep trust deficit in the powers that be in Myanmar is what reduces their aspirations to a mere pipe dream.

The memory of a lost country lives on. Beyond the exhilaration of breathing freedom, there remains a sense of mourning for their native land. For an exile, the joys of the present are quite perpetually dulled by the memories of the past 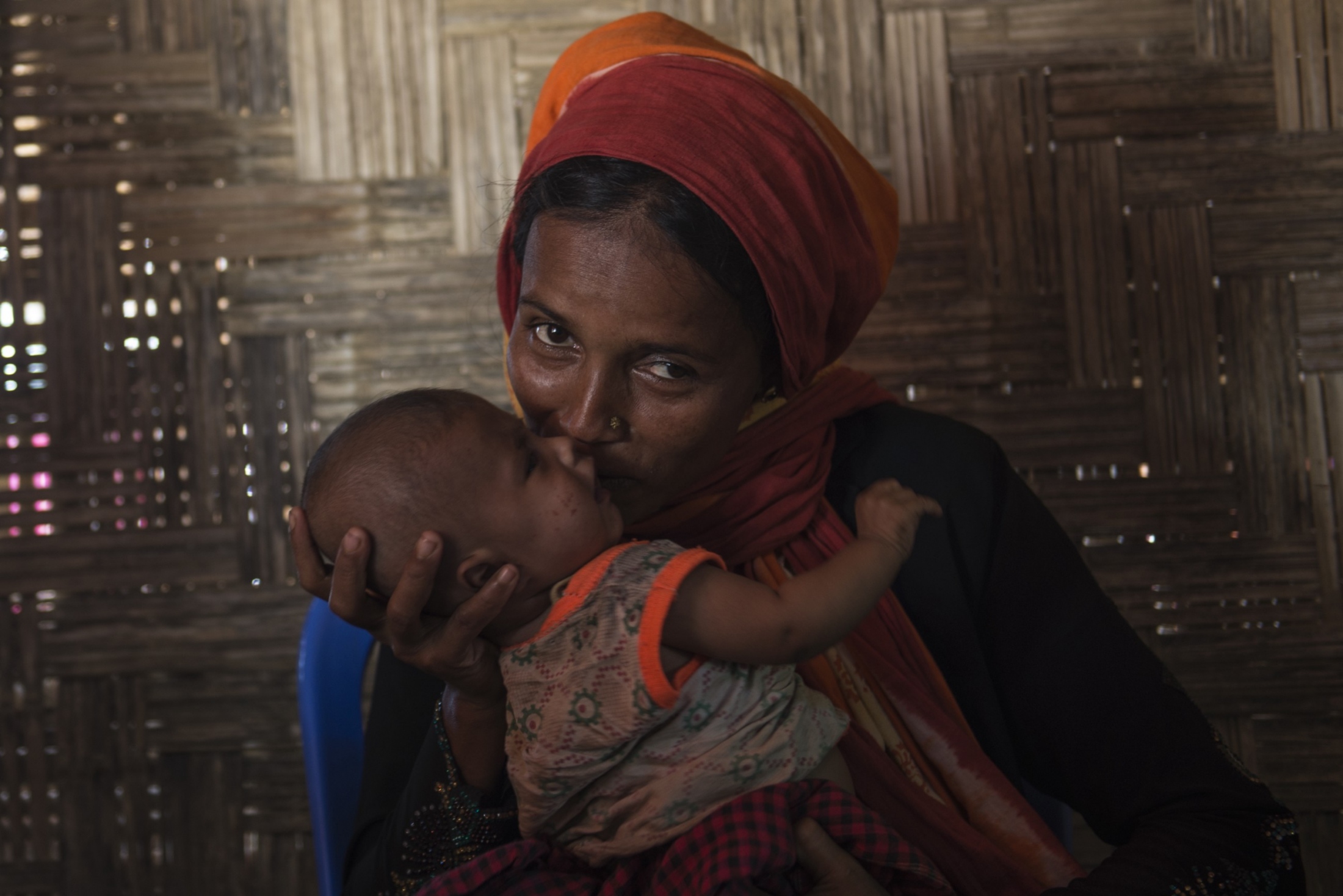 Rahima, 20, holds her three-month-old son Ahmed. “I fled to Bangladesh because of fear, now we are in Bangladesh , happy that I saved my child life. I was 8 month pregnant and suffering from fever while crossing the border. I also have three years old child, so it was very difficult to reach the border from our village in Myanmar. I had to rest frequently. After eight hours of horrible walking finally we crossed the border, paying the broker,” Rahima said.

Not only Rahima, many defenseless brave mothers faced different horrifying experience to save their live and their loved ones. 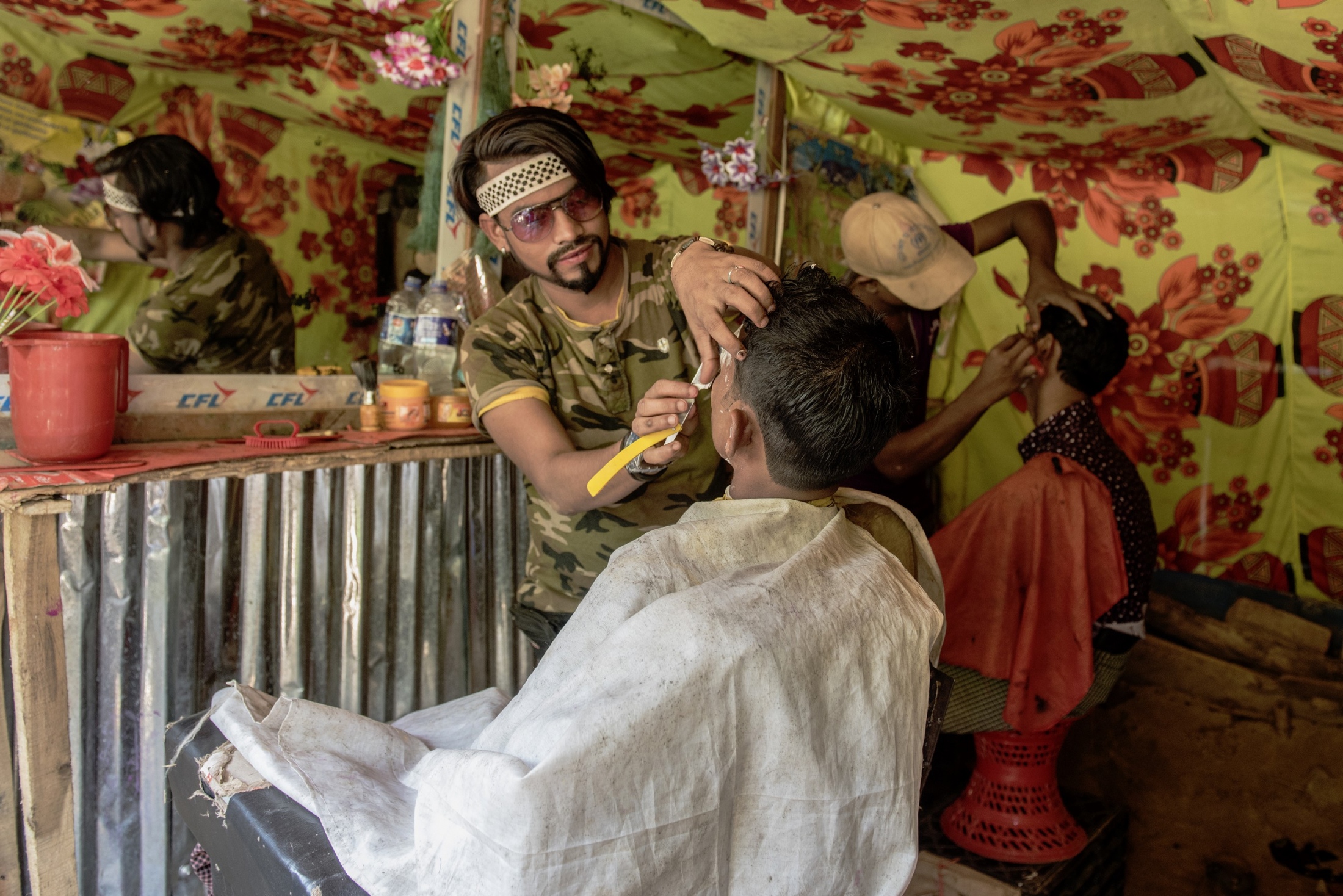 Trading in a host of goods and services keeps the Rohingya going, ranging from live chicken to haircuts to a host of labor jobs. Running their small businesses has resulted in forging new friendships, learning art, sending their children to school with the support of NGOs, even finding life partners, as was the case with Abdul.

Adbul, who does haircuts for living in a refugee camp, was part of an earlier 1977 exodus of over 200,000 Rohingya after the brutal army-ordered purge that year.

Abdul says the new-found freedom has come at a price. He revealed in an interview given to me that his people had been forced to abandon their loved ones besides everything they owned in the Rakhine region that was once their home.

Many are still traumatized by what they have experiencedâ€Š—â€Šmost have no idea of the future that awaits them, Abdul adds, as he waits for his next customer.

Abdul is thankful that they experience safety and intellectual freedom, albeit weighed down by emotional distress that displacement brings. He reveals that the Rohingya refugees pine for a return to normal lives in their homeland, but which in the same breath, he adds, remains a pipe dream. 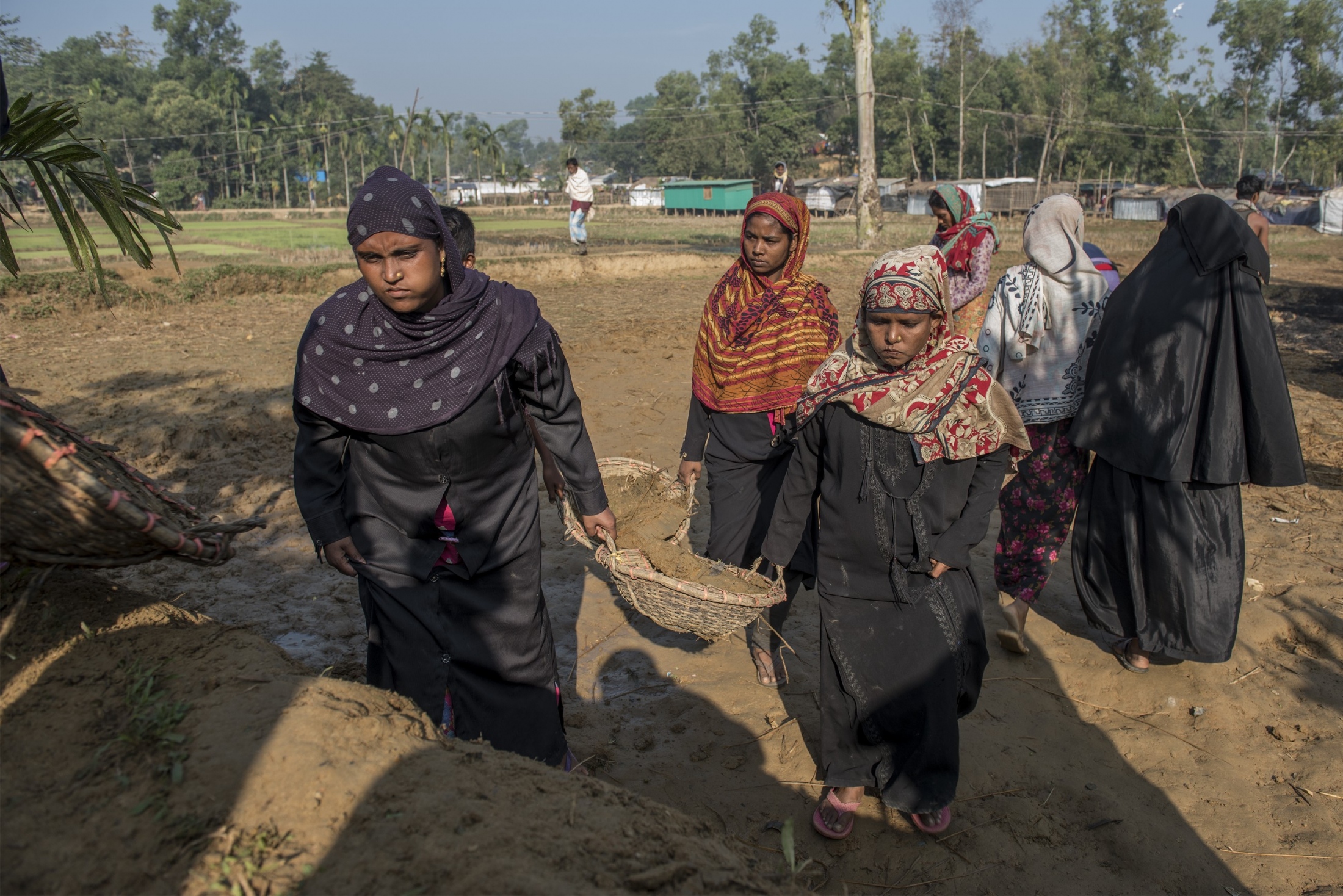 Rubida Alam and her neighbors at work, for this work cash income, paid immediately to meet their food and basic requirements which was provided ACF and Mukti Cox Bazaar, Bangladesh 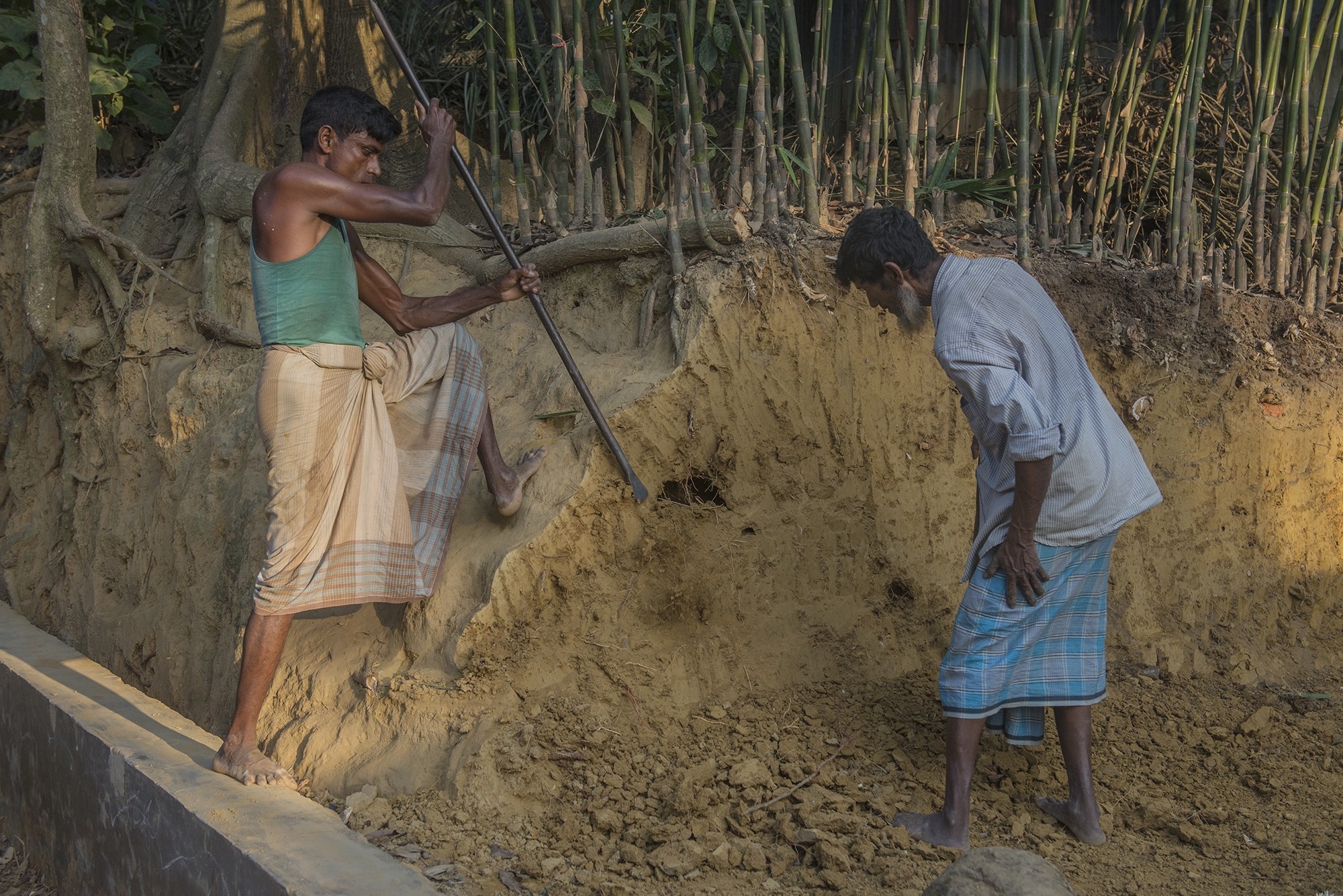 We want rights and freedom

We want to go back to Myanmar, we want to live in peace and have citizenship rights and freedom before I die sadly”, said Rahman.

In Myanmar, the Rohingya have no human rights, discriminatory laws and practices which have effectively denied citizenship to Rohingya on the basis of their ethnicity.

The memories though of a lost country live on. Beyond the exhilaration of breathing freedom, there remains a sense of mourning for their native land. For one exiled, the joys of the present are dulled by the reminiscences of the past. 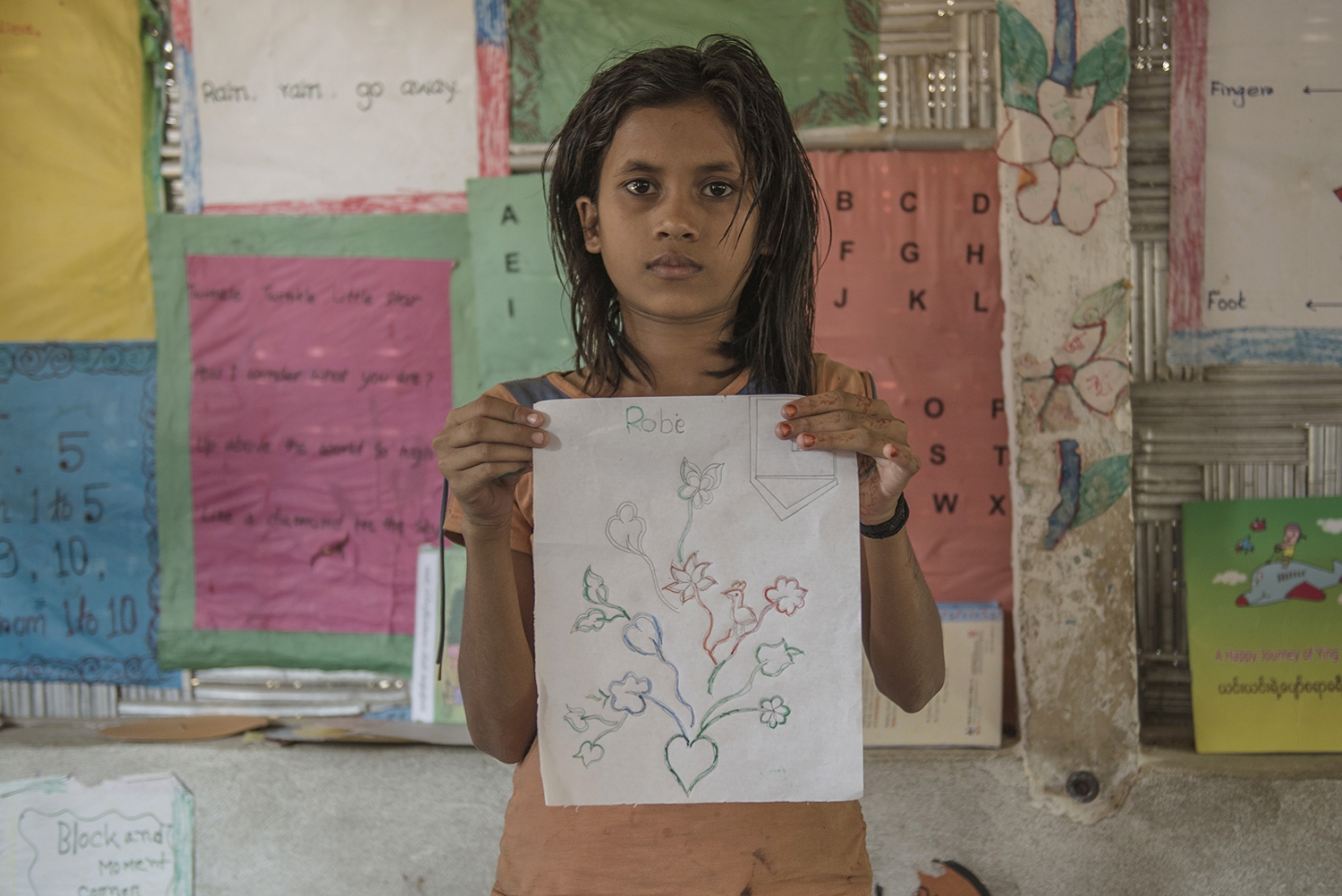 Young Girl Fatima actively learning the art from the Rohingya School, she wishes to become as a teacher and serve Rohingya Community 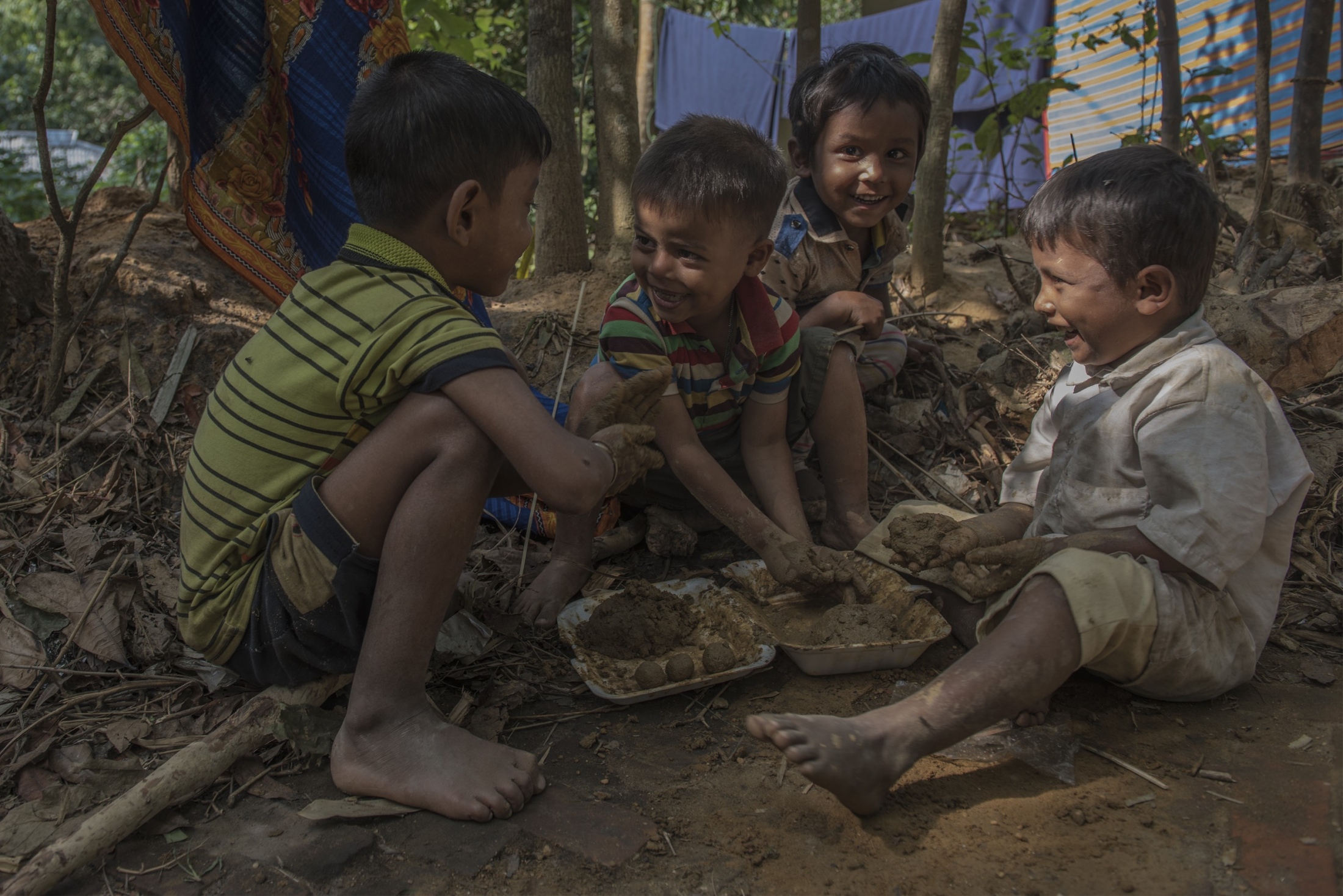 Rohingya Hindu Children at play in the Refugee Camp, Bangladesh 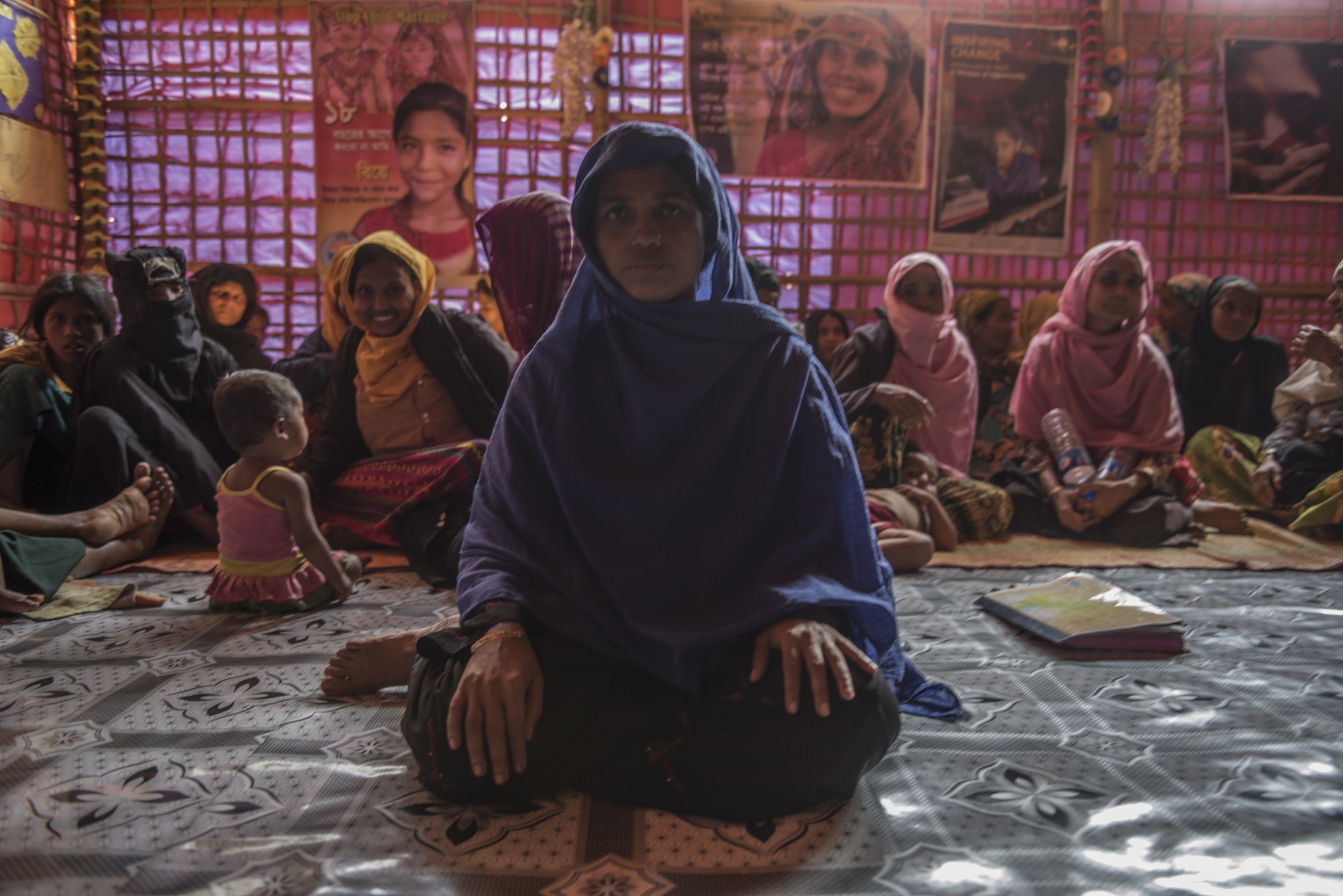 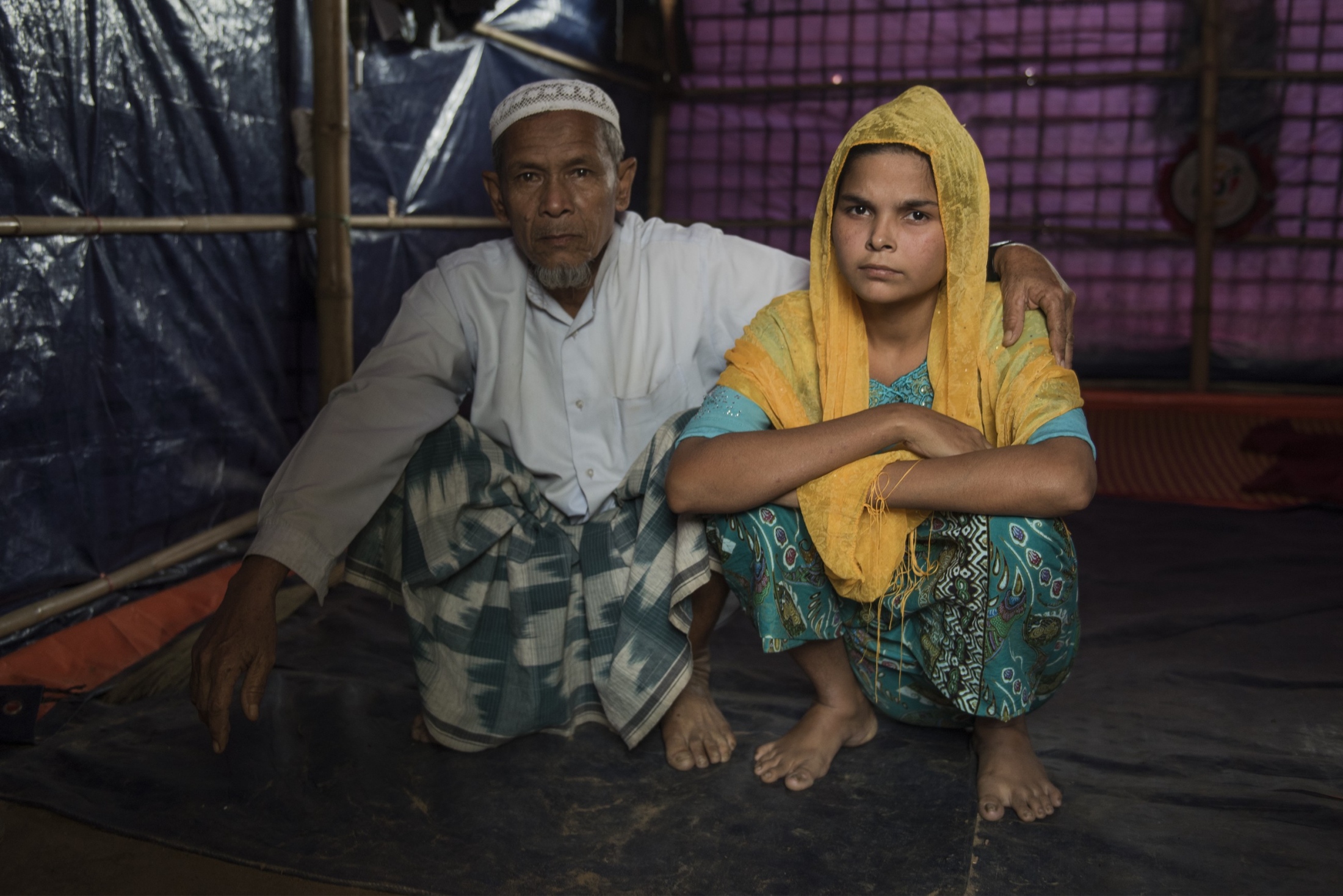 Marriage in the Rohingya Camps in Bangladesh

Early marriages are common among the Rohingya community. Abdul (67) married Fatima(19), “My parents wanted me to get married so I couldn’t say no, I am the eldest in my family, I have 8 sisters and one brother after me, predators and traffickers are major threat inside the camp, being single is not safe so my parents want me to marry Abdul , moreover he is taking care of me very much,” Fatima Said. 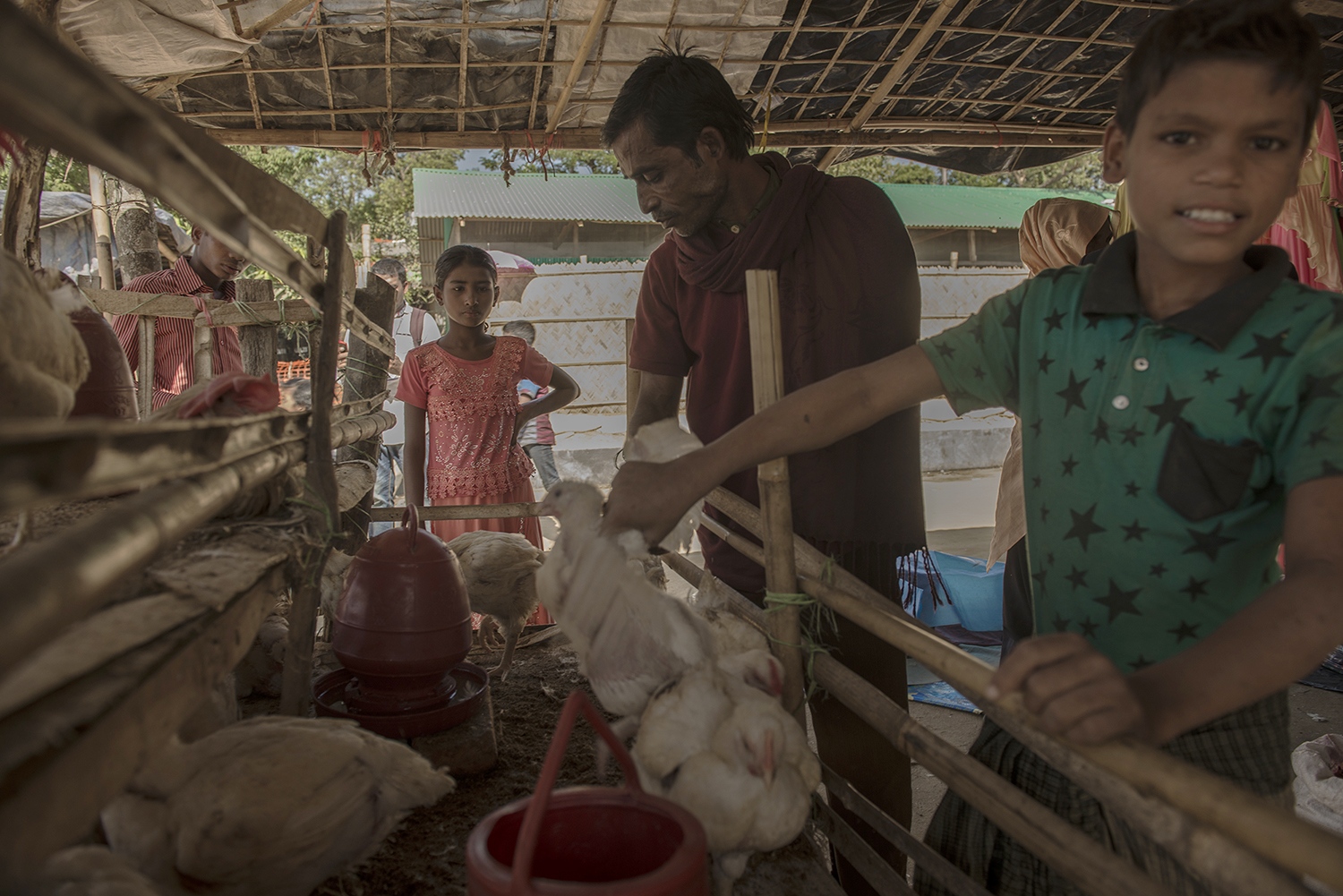 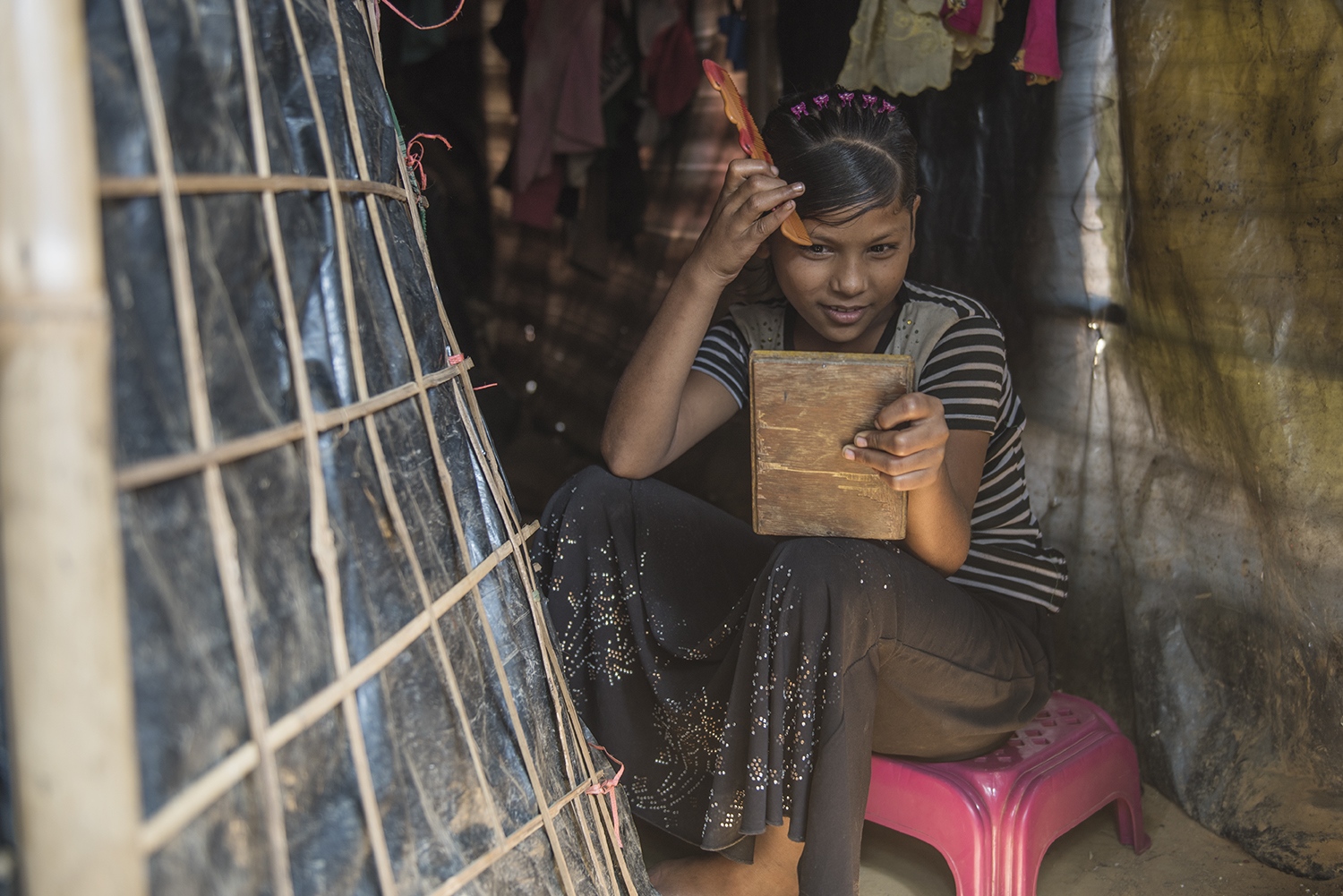